A Complete Guide to Hard Hat Safety: The Evolution of Head Protection 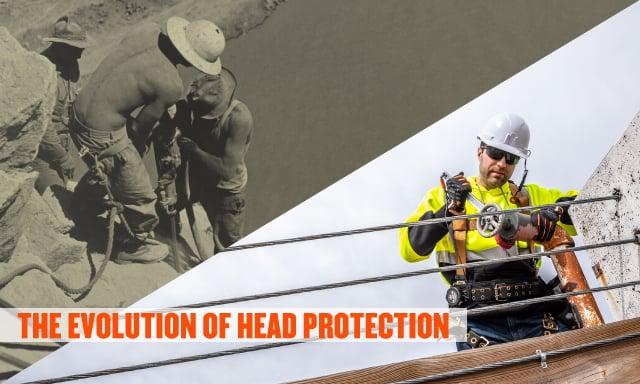 The hard hat: keeping it 100. Literally. This fearless guardian of gray matter has been serving and protecting workers for more than a century. And like a good whiskey or your favorite pair of jeans, it just keeps getting better with age.

From the steamed canvas and glue 1919 originals (aka the Hard Boiled Hat) to the aluminum versions worn during the construction of the Golden Gate Bridge (one of the first times brain buckets were required on the job) and beyond, the venerable hard hat has progressed, with every tweak and improvement leading to advancements in comfort and safety. 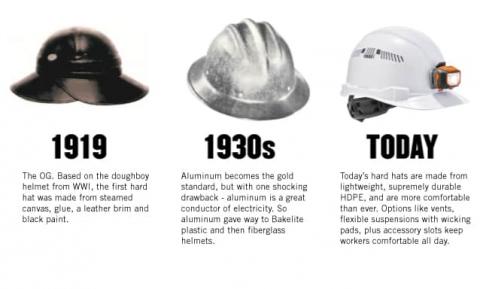 FUN FACT! Before hard hats, shipyard workers used to smear tar on their caps and then let them dry and harden in the sun. This was to add protection against things falling from decks of the ships, but also against the aerial assault from seagulls who liked to pick up food (or things that looked like food) and drop it to the ground below to either break it open, or to discard it when they realize it’s not actually edible.

HARD HAT BASICS: WHAT DOES A HARD HAT CONSIST OF?

Here’s a look at the basic anatomy of today’s safety helmets.

A hard hat consists of a tough shell (usually HDPE). The outer shell usually comes in one of two styles, either a full-brim hard hat or cap-style hard hat, which has a small brim similar to a baseball cap. Full brim hard hats have a brim that extends around the entire hard hat for added shade or to help deflect rain. Cap-style hard hats have a small bill like a baseball cap to keep sun and rain out of the worker’s eyes, and some can be worn backward for better upward visibility. 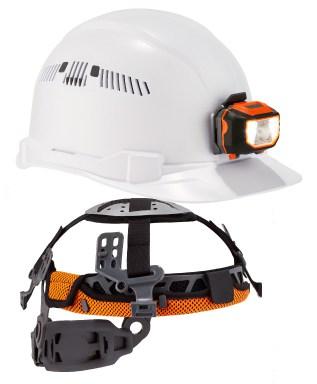 Suspension raises the hard hat at least 1” to 1 ¼” off the top of the head to help better absorb impact before it reaches the head. This space between the head and hard hat is critical in absorbing and dissipating impact, therefore nothing should be placed/stored between the suspension and the helmet because it can affect the protective abilities of the hard hat. The suspension attaches to the hard hat by either four, six or eight points of contact. 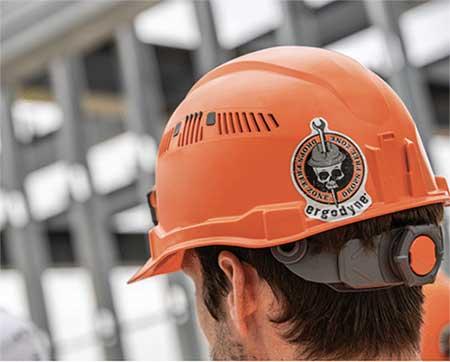 There are also different types of adjustment systems when it comes to suspension – ratchet or pin lock are the most common. Pin lock is adjusted like a snapback baseball cap – you’ll need to remove the hard hat first, but by pressing one band into the other, it will lock in place. The ratchet system allows the worker to leave the hard hat on and just twist a knob at the back to adjust the fit.

WHAT DO HARD HAT COLORS MEAN?

Hard hats also come in a number of colors, and can occasionally signify different roles on construction sites. There are no official rules and regulations on hard hat safety color codes, however, so these color designations can vary from job to job and company to company.

WHERE ARE HARD HATS REQUIRED?

As mentioned above, one of the first major construction projects in which hard hats were required was the construction of the Golden Gate Bridge in 1931. Project chief engineer, Joseph Strauss wanted to create a safe workplace and reduce the number of fatalities commonly associated with projects of this magnitude. It was estimated that one life would be lost for every $1 million spent on a construction project, and it was his goal to buck that average.

Strauss implemented safety measures like hard hat areas, workers wearing safety lines, safety nets, and glare-free goggles to ward off eye strain from glare coming off the water below. What set this project apart wasn’t necessarily that he implemented safety features, but that compliance was mandatory...or else. Workers would be terminated if they were caught not using their personal protective equipment or they were caught being daredevils on the beams or wires.

Today, there are governing bodies like OSHA to ensure workplaces are safe and workers have access to PPE on the job. OSHA requires hard hats to be worn if the following conditions are present:

The requirement states that “employees working in areas where there is a possible danger of head injury from impact, falling or flying objects, or from electrical shock and burns, shall be protected by protective helmets.” If these hazards are present, employers must provide employees with head protection that meets ANSI standards.

WHAT TYPE OF HARD HAT DO I NEED?

ANSI standard Z89.1 is the standard that covers hard hats. If a hard hat meets this ANSI standard, it is also compliant with OSHA. While many hard hat manufacturers test and certify their products, employers and workers will still want to verify that their hard hats meet the ANSI standard.

The three classes of hard hats are:

This standard also requires hard hats to be labeled with the manufacturer’s name, the applicable ANSI standard for the specific hard hat, the type and class, size range, and date of manufacture. If the hard hat meets the 2009 revision of the standard (ANSI Z89.1-2009) it must also feature whether the hat can be worn forwards or backwards. To determine whether or not the hard hat can be worn reverse donning, look for a symbol comprised of two curved arrows forming a circle.

HOW TO CARE FOR YOUR HARD HAT

Get the most out of your head protection by treating it right, storing it properly and inspecting it for damage on a regular basis.

Always inspect your hard hat and suspension for cracks, dents, knicks and other signs of wear. Get rid of your hard hat if it or the suspension is damaged, or after it has sustained an impact, even if the damage is not visible.

Most hard hats should be replaced every five years regardless of outside appearance. Some manufacturers recommend hard hat suspension replacement yearly. However, your individual work environment may shorten your hard hat’s service life.

Workers in extreme conditions or where there is exposure to chemicals or high temperatures may need to replace their hard hats as often as every two years. Hard hats that have been exposed to heat, sunlight or chemicals may become chalky, dull or inflexible. Flex the brim of your hard hat to determine if it has become brittle and hard, or if it still has some flex. We recommend checking it against the flex of a new hard hat for an accurate gauge/feel.

Hard hats should be stored out of direct sunlight when not in use and cleaned with mild soap and water. Harsh solvents or abrasives can degrade the shell’s plastic, reducing the integrity of the shell.

Most hard hats shouldn’t be painted or marked with permanent marker as the solvents in paint/marker can also weaken the plastic. Stickers are acceptable as long as they don’t cover damage and are located at least ½” away from the edges of the hard hat. And this may go without saying, but never alter, puncture, modify or engrave the shell or suspension of a hard hat. 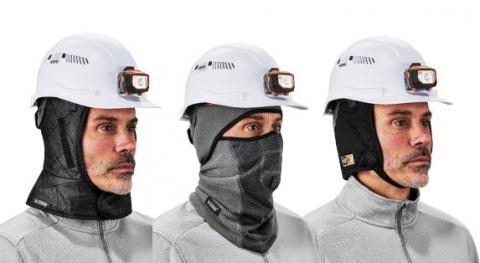 There are a number of ways to make your hard hat more comfortable for the environment or application at hand. Hoods, winter liners, bandanas, skull caps and similar types of head covers are fine when worn under a hard hat as long as they fit smoothly on the top of the head and don’t contain any metal parts. Baseball caps should not be worn under a hard hat as they can interfere with the suspension’s fit and ability to absorb and dissipate impact.

Brain bucket technology has certainly come a long way over the last century. Because hard hats are required on many jobsites, manufacturers are more cognizant than ever of the need to make them comfortable, customizable and well-balanced. Workers now have more choices than ever with options like ventilated hard hats, lightweight carbon fiber hard hats, and slots for hard hat accessories like hard hat lights, face shields, hard hat hearing protection, hard hat chin straps and more.

Check out our Bump Cap vs. Hard Hat post for more info on the options you and your workers have for jobsite head protection. And as always, make sure to share the knowledge with crew and colleagues! Because, let’s face it – it’s a hard knock life out there.