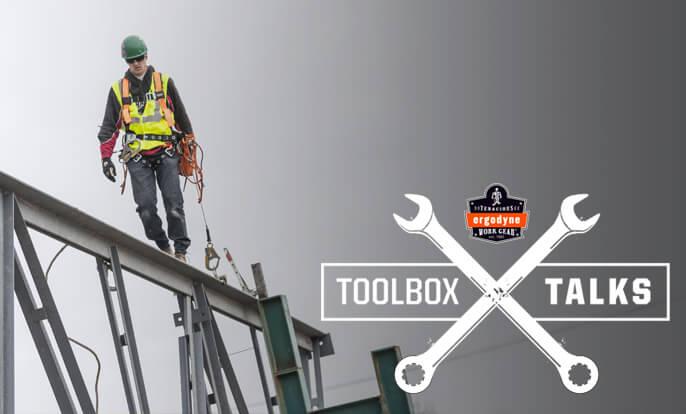 Toolbox Talks are intended to facilitate worksite health and safety conversations. Click here to download talking points on Objects at Heights Risk Awareness and Prevention to share with your crew.

TL;DR // Short Attention Span? If you remember nothing else from this post, remember these things... Hey, look! A squirrel!

Quick. What do you think of when you hear “Safety at Heights”? OK, time’s up, pencils down. If you’re like most, your brain went straight to a worker in a fall arrest harness. And for good reason. Fall protection for the worker is wickedly important and, thankfully, it has come a long, long way over the last century.

While the use of a body harness for people working at heights is standard practice, tethering the tools they’re using is not. Typically, the potential dangers of falling objects at jobsites are addressed with passive engineering controls like toe boards, netting, barricades and the like. But active controls like those called out in the dropped objects standard are much less common. Those include things like tool and anchor attachments, tool lanyards and topped containers.

THE RISK OF DROPPED OBJECTS

The definition of a “dropped object”, as outlined by the DROPS organization, is "any object that falls from its previous position.” Pretty straightforward, yeah? But still, a couple things worth noting:

Additionally, there are two types of dropped objects: static and dynamic.

Some are obvious, others not so much. We can break those causes into two categories. Those brought on by the elements, and those generated by workers or equipment.

A Quick Word on Poor Housekeeping

Being unorganized while working at height can lead to its own set of issues, such as unnecessary movement and time at height. Simple math tells us that increasing the last two also increases the chances an incident will occur. Sloppy cord management is a popular housekeeping issue. Whether it be hoses, ropes or electrical cords, without taking care to route and/or store them safely, they become a danger laying across walkways, platforms, etc.

Another result of poor housekeeping? Foreign materials causing potential damage. Think about litter getting sucked up in an aircraft engine or loose nails on the ground puncturing a tire.

A close relation to housekeeping is transportation of equipment to and from the at-heights work zone.

Improper equipment transport can lead to:

THE COST OF DROPPED OBJECTS

Now that you know the risks, let’s look at the costs associated with them, including injury/fatality, damage and lost productivity.

Injury and fatalities are the most severe costs associated with these risks. In 2020, the Bureau of Labor Statistics reported 241 deaths and almost 52,000 injuries due to falling objects.

While workers and bystanders can certainly be injured by falling objects, there’s a less obvious risk to the individual that drops the object, too. Think about your gut reaction after you’ve dropped something (AKA the “oh sh!t effect”). That instinct to quickly reach out for it could throw a worker off balance.

Damage can take many forms when it comes to Objects at Heights risks. The two most obvious types of damage are to the object itself or to something the dropped object hits below. Less obvious would be damage to the structure being worked on, like to an aircraft wing or the nacelle of a wind tower.

Yet another form of damage can occur from foreign material/objects. Think of an engine manufacturing facility leaving a small bolt inside one of their engines. Not good.

Environmental damage can also stem from dropped objects or poor housekeeping if the objects are not retrieved. Jobsites over water like bridge construction or offshore drilling operations come to mind.

The third category of costs related to dropped objects is lost productivity. This could be associated financial loss when work stops to investigate a near miss. Or it could simply be the lost time from a worker climbing back down to retrieve a tool and climbing all the way back up again.

You’ve seen the risks and the damage that can be done. So how do we stop the drops? Let’s take a look at some Objects at Heights solutions that can be implemented through the lens of the hierarchy of controls.

The hierarchy of controls is a sequence of controls safety professionals should go through when implementing solutions for a particular risk.

Safety equipment most commonly falls into the bottom three categories.

PPE measures like hard hats and safety glasses are always the last line of defense (the first, most effective is eliminating the risk all together). Though important to an overall strategy for Objects at Heights safety, we shouldn’t stop at just mere protection.

Administrative Controls look to change the behavior of the worker through training, awareness or implementing policies and procedures.

Objects at Heights engineering controls look to PREVENT an object hazard. It prevents a drop from occurring or prevents any loose item from becoming a trip hazard. PREVENTION is the key word here compared to PROTECTION (like hard hats).

There are two types of engineering controls:

Passive controls do not require active participation from the worker. These solutions, like netting, are stationary solutions that prevent an object from becoming a hazard or catch it as it falls.

Active controls, like tool lanyards, are different. They are interacted with through the work day by the worker and move with them during the job.

Just as fall protection has the ABCs (Anchorage, Body Support, Connectors), the category of Objects at Heights has the 3T’s: Trapped, Tethered, Topped.

The biggest issue with tools at height is that the vast majority of them do not have connection points built into them (be cautious—just because something looks like it has a connection point, it doesn’t mean it’s engineered to be one.) This where trapping comes in.

Trapping is a term used to describe the installation, or "trapping", of retrofit attachment points onto tools and anchoring locations. Note that anchor attachments built for heaver tools should only be installed onto locations that are secure—never affixed to an individual.

Tool attachments come in a variety of designs based on the tools they are intended to tether. These “Tool Traps” should never compromise the integrity of the tool or impede the tool’s primary function.

They are available in one or two step applications (see video above).

Tethering prevents the object itself from falling, or at least falling very far, by securing the tool or object to a worker or other anchor point. This retention is achieved most often through the use of tool lanyards.

But, while tethers can stop a tool from crashing to the ground, they can’t stop gravity or reduce deceleration. When “caught” by a tether, the dropped object is subject to a shock load—a force that’s instantly transmitted across the whole system (tool, attachment, tether and anchor point). This can not only be detrimental to the tool (the same “whiplash” that affects falling workers can also damage internal equipment components) but, most importantly, to the worker the tool is attached to. The force can create jarring on the body or, in a worst case scenario, pull the worker down along with it.

All of this is why, whenever possible, you should use lanyards with a shock-absorbing design. These lanyards will both prevent the tool from hitting the ground and absorb some of the dynamic force—decelerating the tool to a smooth, safe, uneventful stop. Further, minimizing the length of the lanyard will also reduce the time and distance a dropped tool can travel (and, as a result, the acceleration and forces which must be absorbed).

Beyond shock absorption, here are the major things to consider when choosing a tool lanyard:

As tool tethering has evolved, a variety of tool lanyard styles have surfaced but most fall into five basic categories:

The 3rd T, “Topping”, consists of the containers workers use to transport and store tools and equipment at heights. Topping describes having a closure on all containers, whether it’s a bucket, box or bag to prevent contents from spilling out if tipped over.

There are two types of containers used:

Many workers use tool pouches and bolt bags to carry equipment. Look for pouches that are designed with a cover that is secure. Whether it’s a flap, drawstring or other type of closure on the pouch, it should keep the contents from spilling out if the worker is climbing, bending over or stretching to reach something.

Containers that are hoisted should also be topped. Especially because the user has less control than they do with a pouch or bag they are carrying. Bags and buckets are often attached to a line or other piece of equipment and lifted. In the event the line or container catches while in transit causing it to turn or tip, a top will prevent the contents in the container from raining onto individuals and equipment below.

Like tethering, there are certain factors to consider when choosing how to store tools or other objects and what containers to use when doing so:

TESTED TO BE TRUSTED

The 3T’s of Objects at Heights safety should all have one additional T in common—tested. Every solution you use should be tested and labeled with a maximum capacity rating.

Safety factors are built into all quality safety equipment. This is especially important when considering the high potential for misuse—folks loading up buckets and bags past their stated capacity, for instance. The safety factor ensures that, if a worker inappropriately connects an 11lbs (5kg) tool to a 10lbs (4.5kg) tool lanyard, the situation remains safe.