Decreasing Slips, Trips and Falls: How to Choose the Right Traction Device for the Job 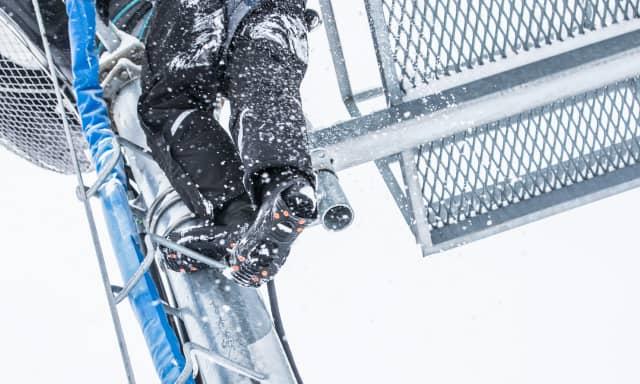 If over a quarter century of America’s Funniest Home Videos has taught us anything, it’s that people fall—a lot. But with falls accounting for over 30,000 deaths in the U.S. each year (the third highest among accidental deaths), it’s not always as funny as Bob Saget, Tom Bergeron, Alfonso Ribiero or *insert dad-joke machine here* make it seem. And while Canada may not have AFV, they still have their fair share of wipeouts. Each year in the North, over 42,000 workers are injured in fall accidents—accounting for nearly one out of every five “time-loss injuries”.

The cost of these accidents is steep. It is estimated that, of 3.8 million disabling injuries per year, 15 percent are caused by slips, trips and falls. These account for 12 to 15 percent of all Workers' Compensation costs—with the average disabling claim costing a hefty $28,000.

The first safeguard in the battle against slips, trips and falls? Keeping floors and other walking areas dry, clean and free of debris or other storage materials. At indoor jobsites, the selection of flooring, waxes and maintenance procedures also plays a key role. Prompt cleanup of contaminants such as oil, spilled water or other potential liquid lubricants is critical.

Outdoor surfaces are more difficult to control due to changing environmental conditions. This risk applies to nearly all employees, including those who normally work in offices and particularly those who travel for service, delivery, sales or other activities (even commuting). An act as ordinary as getting in and out of a vehicle can end in injury if the driver is not prepared, especially when poor lighting and glare obscure risks as the sun goes down and temperatures drop. 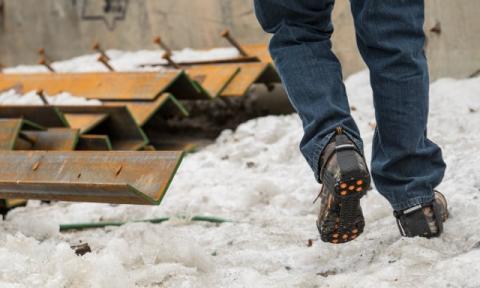 States in the Midwest, Mid-Atlantic and Northeast are most at risk for snowstorms, ice storms, hail and that thin, nasty, hard-to-see layer of “black ice” that forms on ramps, steps and roadways. But, just because you’re not in those regions doesn’t necessarily mean you’re in the clear. At last check, all 50 states have reported snow and ice on an annual basis. And, as made evident by school closures below the Mason-Dixon following a light dusting of snow, those who least expect it are typically the most ill-prepared—and, thus, at risk of injury.

When you can’t control the walking surface, proper footwear is the next “step”. (We’ll see ourselves out…)

(... just kidding, you’re not done with us yet). Workers should start by wearing sensible shoes for the expected environment. Avoid shoes with smooth soles, pointed heels, slip-on designs or other styles prioritizing appearance over support. If dress shoes are required, it might be wise to wear alternative footwear until you arrive. Worn or damaged shoes should be repaired or replaced.

When deeply lugged soles that readily conquer mud, snow and gravel turn out to be no match for icy hellscapes, traction devices are better than scattering rock salt or kitty litter in front of you as you walk. The trades made studded footwear cool decades ago, what with lumberjacks and their spiked-sole “caulk boots” and mountaineers with metal “crampons” strapped to their boots.

While appropriate for select occupations in certain climates, cleated footwear may not be best for intermittent use—or unexpected weather changes. In those cases, an easier to remove ice traction accessory might be a better choice.

Traction devices should be as standard a winter accessory as your thermal hat and insulated gloves. They should be easy to put on and take off, and convenient to keep with you. Avoid traction devices with complex straps or buckles that could freeze, and be sure to try them on before setting out in a blizzard to ensure they work with the style and size of your shoes or boots.

You also need to consider what style of traction device is suitable for your intended use. Steel spikes are ideal for deep snow and off-pavement use, while shorter studs are more appropriate for sidewalks and parking lots. New spikeless devices provide an alternative to traditional ice cleats. Depending on the tread technology, they can be a fitting choice for workers needing non-conductive footwear or those who frequently transition from indoor to outdoor environments.

Ice cleats with carbon steel studs provide solid traction on ice and snow-covered surfaces. Heat treating the carbon steel hardens the compound, making it even more durable on rough terrain. Tungsten carbide studs are another increasingly popular style of ice spikes. Made from an exceptionally hard and durable compound, tungsten carbide studs wear up to 100 times longer than steel and can be made thinner—allowing for better penetration and sharper grip on ice and snow. Regardless of which you choose, ice cleats should provide traction at both the heel and midfoot where ground contact is concentrated. 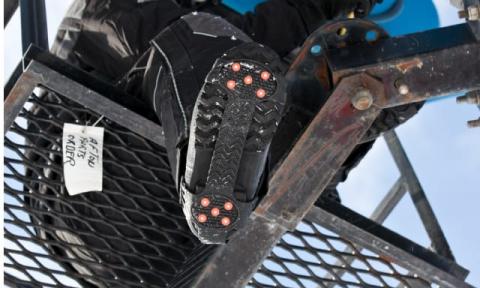 In some work environments, special designs should be considered. Heel-only traction devices are preferable for workers who regularly climb ladders or operate pedals in vehicles or equipment where ice spikes across the middle of the foot might interfere.

Workers in environments such as railroad yards would benefit from spikeless traction devices made from non-conductive, non-sparking materials. For traction on slick surfaces in both indoor and outdoor environments, look for devices with treads designed specifically to provide grip without damaging surfaces. 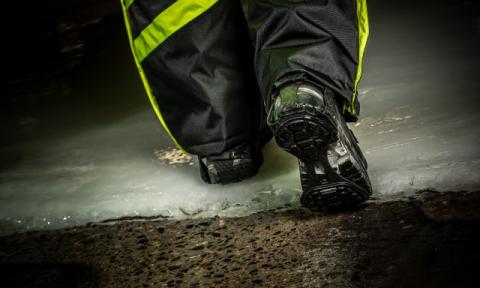 As with all types of safety gear, quality is incredibly important. Traction devices intended for daily occupational use should be designed and tested for work-grade durability. Designs and materials have improved significantly in recent years. Modern thermoplastic elastomers (TPE) are rigorously tested for low temperatures use because, as you can imagine, snapping like a cheap rubber band would not be appreciated on a bitterly cold day. Similarly, ice studs should be hard enough to dig into ice—but not so hard that they become brittle and chip or shatter on pavement. It’s wise to look for models available with replacement studs in the event this does happen.

Taking the Next Step

At some companies, ice traction devices are standard issue to delivery drivers, route salespeople, etc. as part of their loss control efforts. Others make suitable devices easy to obtain by promoting them to employees as part of a group buy or with purchase subsidies in a 24/7 safety program. They can also be included in established safety footwear programs covered by annual stipends or allowances. Whatever the approach, personal ice traction devices help employees put their best foot forward confidently and safely. Better luck next time, America’s Funniest Home Videos.