Demand the Safety to do Great Things: Living Against the Grain 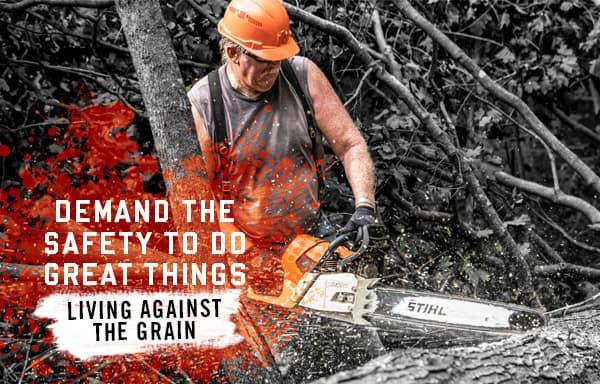 Veteran loggers show what it takes to tackle America’s most dangerous job.

The first thing that hits you is the smell. Then the flies. Fresh cow pies baking in the morning sun mingle with sour sweat, mildew and gasoline, attracting a dive-bombing frenzy of winged belligerence—the little bastards are relentless. It’s barely past 8 a.m. when we meet up with the boys from Root River Hardwoods in the grazing pasture that abuts the logging site but the hot, heavy morning already carries the weight of midday. 90°F and rising with high humidity. It’s going to be a slog.

“Why do I do this? I dunno… stupidity?” That’s Tom—woodcutter, father, grandfather a “few times over.” Leaning against the tailgate of the company pickup, “a long time” is his reply when asked how many years he’s been in the tree logging game. “There must be something that I like about this work to do it for so long,” he says. “Maybe it’s the independence. Very little BS. I wake up in the morning with a job to do, I do it and then I go home. It’s about as close as you can get to working for yourself.”

With Tom is Jeff, owner/operator of Root River Hardwoods for over 30 years. “This job ain’t for everybody,” Jeff says. “I’m kind of the outlaw in my family. I’m the only one that doesn’t live in the city. The only one without a desk job. I just love being outside. But between the bugs, the weather, the danger… it’s extremely difficult to recruit young blood.” 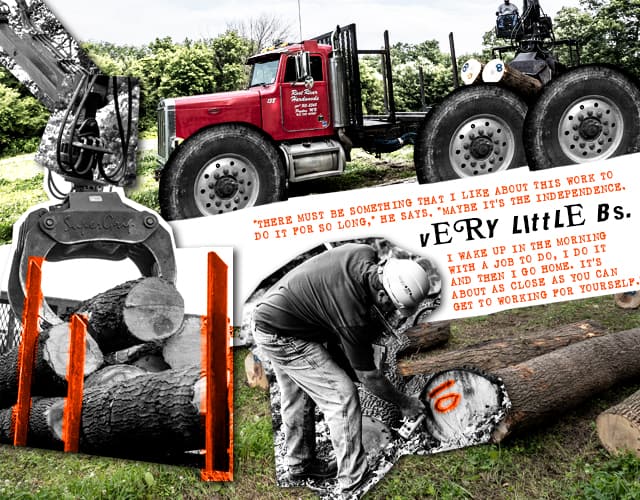 But enough chit chat, there’s work to do and it’s only getting hotter. The two-man crew—Tom included, now at the controls of his trusty skidder—descend down into the woods which, if you can believe it, turn out to be even more oppressive. Zero breeze, meaner bugs and mud from the recent storms threaten to pull a guy out of his Red Wings with every step.

“Storm clean-up is some of the most dangerous work for my guys,” explains Jeff. Damaged limbs hanging precariously or leaning against other trees make felling a bit more unpredictable. He’s out at the jobsite hours before the woodcutters, identifying and marking potential trouble spots.

“Look over there,” says Jeff, pointing to a large fallen limb wedged in another tree. “We call that a widow maker. I don’t really need to explain to you why.” And the danger is more than anecdotal. Tree logging consistently tops the Bureau of Labor Statistics Most Dangerous and Hazardous Jobs list.

By lunch, Tom has felled and removed two large trees, which will eventually make their way to the lumber mill and be processed into stock for high end luxury homes. The irony of a McMansion rising from the cow pies is rich and satisfying.

“On days like today, I’ll encourage Tom to take a break after each tree he hauls out,” says Jeff. “More than anything, I want my guys to be safe. Heat like this can zap strength and wits out of you.” And indeed, when we resurface from the stifling depths of the woods, there’s Tom—using a fallen oak as a makeshift bench, shirt soaked with sweat, taking in the steady breeze now rolling through the open pasture. It’s a blast furnace, but it’s something. 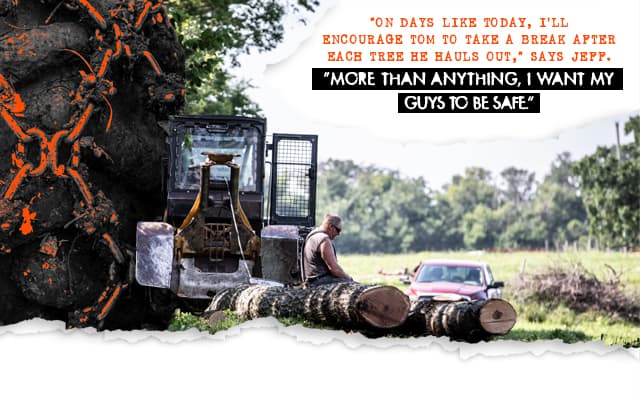 So with the heat in no hurry to break and Tom looking like he’s put in a full day already, they decide to call it and come back fresh in the morning.

With a gig like this, keen awareness and proper use of equipment is literally the difference between life and death. And the Root River Hardwoods team knows they’re battling more than trees. Sure, the crew needs the obvious—chainsaws, hard hats, cut-resistant gloves, safety glasses and all sorts of forestry machinery. But they’re also facing the extremes of Minnesota weather head on, and protection from the elements is a crucial factor in getting the job done safely.

A few minutes of ceremonial small talk precedes everyone’s departure as we pack up. Asked about it, Tom recounts the handful of injuries and close calls he’s had over his decades long, chainsaw wielding career—from broken neck to crushed toes. “But somehow,” he says, rather amazed with himself, “after all these years, I’ve avoided getting cut—no stitches. I’ve been pretty damn lucky, I guess.” 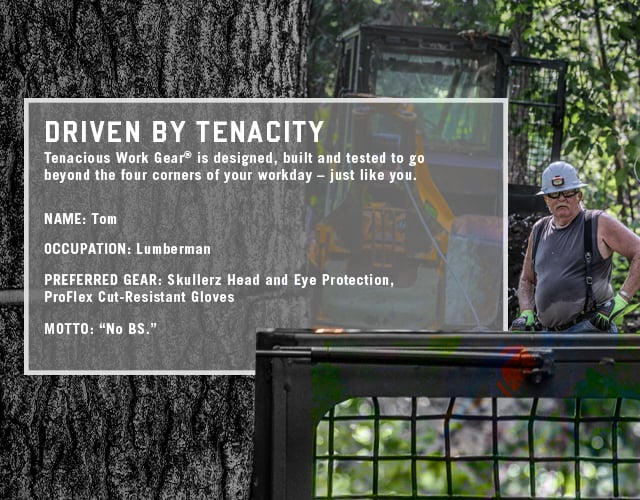